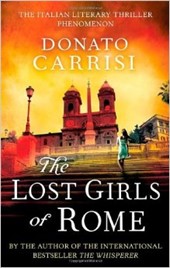 Initially I bought this as an audio book because Audible ad a two for one offer. But I eventually succumbed to buying a Kindle version as well. As an audio book it was difficult to listen too, especially when driving. It starts off as two separate stories, completely unconnected, and then a third story is added later in the book. So now we have the story of Marcus, a man with no memory investigating the disappearance of Lara an architecture student, the story of Sandra, who is trying to find out why her husband died 6 months previously and the story of the hunter, a man with no name on the trail of "The Transformist", a mysterious serial killer. Some reviewers have likened the work to that of Dan Browne, but this does it a great injustice. OK, so there is a secret society, the Penitenzeri. Very Dan Browne. A society dedicated to documenting evil, and whose members are Roman Catholic priests. But this is a dying society, phased out by the modern Church. All that remains are a few individuals. Not very Dan Browne, for Mr Browne wants the Church to remain as a mythical superpower of evil.

The ending is unexpected. Lara is recued. Sandra discovers why her husband died. The hunter finds his quarry. But there is one loose end. The fate of Marcus.

I think I would recommend this as a book-read first before listening to it. And try not to drive when listening.