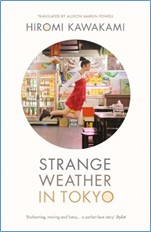 What a strange story. A story of the romance between a high school teacher and a former pupil. A story of the relationship between two drinking partners and their love of food. A story of how a friendship between two lonely single people blossoms into a very touching romance. And a story of our mortality. Forget about the vaporous flights of fancy of Bridget Jones. Tsukiko is a Japanese woman fast approaching 40. The Japanese career has consumed Tsukiko's life. Throughout the book, we do not meet any of her friends, the girlfriends that support single women. The closest thing to a friend that we are introduced to is the occasional boyfriend Kojima, a former classmate. Kojima loses out in the end to the old school teacher, Sensei.

The friendship between Sensei and Tsukiko begins when Sensei recognises Tsukiko in a bar. From that chance meeting, a friendship grows, laced with copious alcohol and plates of food. We learn a little about Sensei's life, and we also learn that despite his advanced years, Sensei is considerably fitter than Tsukiko.

At times, I found the reading uncomfortable, I do not want lengthy descriptions of an old man, but that is part of the story, the age difference between Tsukiko and Sensei. It is an interesting read, a beautifully crafted love story with a slow fuse, and an ending that is to be expected. Worth reading.