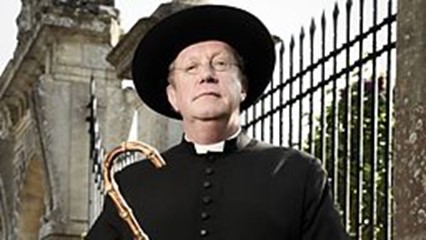 Based on the Father Brown books by G K Chesterton

It is January. And the BBC, as it has done for the last two years, is showing Father Brown again. But why early afternoon? Fortunately there is iPlayer and I am sure most followers of the series watch it through iPlayer.

This series is an absolute joy to watch. Most of the episodes I can download on iPlayer to play back to my elderly mother.

OK so there are some historical inaccuracies. The major one is that the Roman Catholic Church is not the mainstream, established Church in England. The original Fr Brown was set after the First World War, this has been fast forwarded to the 1950's, after the Second World War. But what if lived in a world where the reformation did not take such a hold on England, that ancient parish churches were run by Roman Catholic priests. And then it falls into place.

These are classic Who Done It stories and main detective is a priest who rides a bicycle, aided and abetted by Mrs McCarthy (parish secretary) and Lady Felicia, together with Sid, Lady Felicia's chauffer. The stories are now departing from Chesterton's corpus of work, but some of the basic elements remain the same. Fr Brown is interested in the whole person, body and soul. The stories are set in a time when the death penalty was still in use, so to be convicted of murder could mean execution. Mark William's Fr Brown is a compassionate man, known to eat with sinners, he prays for the souls of the deceased, listens to the confessions of those in need and enjoys cricket and a bottle of good wine.

(The great thing about the BBC is no adverts. Just pure entertainment)

I read the Fr Brown stories many, many years ago, so long ago that the details of the stories have been lost. It was a pleasant surprise to find that some of the Father Brown stories had been adapted for the small screen. Unfortunately, the BBC made two rather bizarre decisions about this series. First, a brand new series was consigned to mid afternoon viewing. What, do the BBC really not consider those of us who work? And the second was that all 10 episodes should be shown over two weeks. So even is you want to watch on iPlayer, you have very little time in which to do this.

Having said all this, the series was extremely watchable. Fr Brown has been moved from post WW1 to post WW2. Fr Brown is now a priest in a piece of England that I cannot recognise – Catholic parishes in England have an assortment of parish churches – some are Victorian, but most hail from the 1920’s onwards. Fr Brown’s parish church would not have been out of place in a series about an Anglican priest, but the Catholic Church in this country does not have pre-reformation churches in its estate. When John Henry Newman crossed the divide, he did not bring any real estate with him. And in the 1950’s, the Catholic Church was not quite as mainstream as the series portrays. But these are minor things. And of course, the careful viewer will note that the stories are “based on”. This give licence for all sorts of changes – the English Inspector Valentine is in the original, Inspector Valentin a leading French policeman who comes to England to apprehend the daring thief Flambeau.

These changes can be ignored, for what the BBC produced was an extremely nostalgic trip back to the 1950’s and an England long gone. The pleasant English village is not a safe place, rather like Midsomer and the world of Miss Marple where death comes calling with monotonous regularity. Despite that, it is a safe world where materialism has not caught hold and neighbours talk to neighbours.

I have now watched all ten episodes – but alas I had to watch them bunched together. However enjoyable the series, this was indigestible, so come on BBC – please can FR Brown be spread out a bit more. And now, I am reading the originals again.