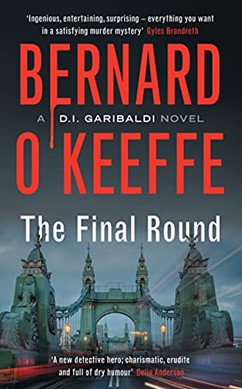 This is a nice, quick read. Very enjoyable, and enough puzzles to keep the interest. We are introduced to D I Garibaldi, Jim Garibaldi, and his personal life. Fairly straightforward character, bit Dixon of Dock Greenish, great at understanding people. Genial, humane. No black dog in attendance, just a man who is about to embark on a new life after the end of a 25 year marriage. Setting the scene is the particularly gruesome murder of Nick Bellamy. There is a symmetry in the book, just as Jim Garibaldi’s marriage unravelled after 25 years, so too do the bonds of friendship among a group of students who met at the Balfour College, Oxford as Garibaldi investigates Bellamy’s death. O’Keeffe explores these characters and their relationship with the victim: Greg the successful author, who is married to Melissa the high flying reporter; Kay the headmistress; Chris the journalist and Julia the lawyer. The backdrop to the novel is Barnes, affluent, intellectual, gentrified, a London “village” that is on the Boat Race course, a village where crime is low and violent crime almost non-existent.

Jim Garibaldi is a man who, if life had dealt him a different hand, would have gone to university, and that desire to study still lives with him. He reads, he is educated, but again and again, is the put down, the assumption is that he is uneducated and not part of the intelligentsia elite. Decades ago, the angst would be the 11 plus, life’s chances denied because one failed the 11 plus, but now it is that all important degree, preferably from a prestigious university that determines your life chances.

O’Keeffe’s style is clever, clues are gradually released, and each time, the reader forms a conclusion. Are you right? No, well here is another clue, and another …, until in the end there is only one solution. A guided treasure hunt, and compelling all the same.

The Final Round by Bernard O’Keeffe
My rating: 5 of 5 stars

View all my reviews