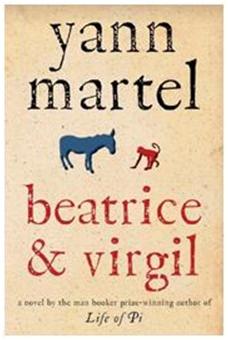 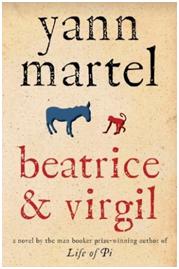 I finished the book. It is quite short and very surreal. What is it about?

It is about Henry, an author with writer’s block who meets a taxidermist who is writing a play about two animals. The taxidermist is stuck and he approaches Henry for help. Another layer. The play is a description of the Holocaust, which is in turn an allegory for the destruction of the animal world by human beings. The holocaust as an allegory for something else?

The end of the book is disturbing and now I wish that I had just abandoned the work after I had just read 30 or 40 pages. There are some books which live with you for the rest of your life. This is one such work.

There is another twist. The story is not just about the depiction about the holocaust in art. It is also about the toxicity of human guilt. The taxidermist is a former Nazi. Was he also involved in the brutality of the holocaust? Did he also torture and brutalise? And now how does he live with himself? By using art to explain away his part in the brutality of the Nazi regime. By using art to deflect the focus, to say that the real evil that mankind has done is not the extermination of 6 million people, but rather the enslavement and destruction of the animal kingdom. The taxidermist’s conscience is assuaged. Or is it?

The Life of Pi has been made into a charming film suitable for family entertainment. This book, if it were ever to make the silver screen would be a horror movie.