The phone rings. I answer. On the other end of the line is a polite american voice  wishing to sell me some stocks in a company that I have never heard of. Alarm bells ring in my head – boiler room scam and I put the phone down, but not before I inform the caller that I do not want to deal with criminals…. 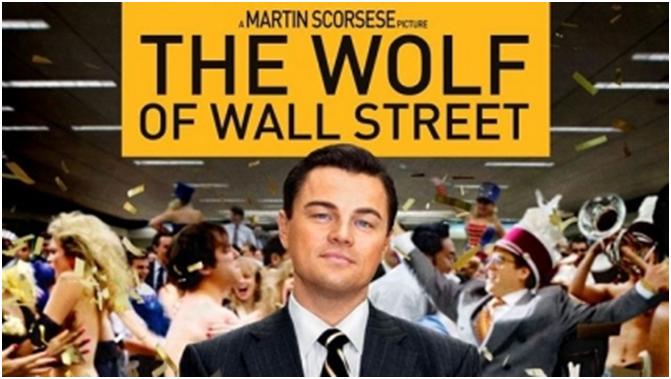 On Friday we went to see “The Wolf of Wall Street” at our local cinema.

Two things stuck in my mind from the reviews that I had seen:

Yes, on both accounts this was true. It was very long and I am sure it could have been edited to remove an hour or so. Was it necessary to have quite so many orgies? And the ending was unsatisfactory. The problem is that the film was based on a true story so the ending could not be edited too much. Jordan Belfort served 22 months in prison for fraud and money laundering and now he is running his own motivational speaking business. $2000 dollars for a set of 10 DVDs to learn how to sell. Part of the judgement against Belfort was that he had to make restitution to his victims, to the tune of an eye-watering $110 million (55,000 DVD sets).

The film covers Belfort’s rise and fall, beginnning in 1987. Belfort begins work with Rothschild Stock Brokers, and then Black Monday happens and the stock market crashes. The great storm of 1987 and the London Stock exchange is off line. Net effect as far as ths story is concerned is that Rothschild folds and the young Belford has to fend for himself. And he does in spectacular fashion, creating the brokerage firm Stratton Oakmont which at its peak employed over a 1,000 people. Stratton Oakmont’s core business was a “boiler room” scam, where worthless stocks were sold to unsuspecting customers. Eventually the justice system caught up with Belfort.

Belfort was deeply into drugs and sex. This is portrayed in the film, perhaps over portrayed. But there is something which is missing. Belfort claims that he had forgotten his ethics in the excesses of Stratton Oakmont. That may be so, but there is a gaping great hole in the centre of this narrative. Compassion for the victim. You are lef at teh end of the film with the distinct impression that as far as the Wolf of Wall Street was concerned, all he had done wrong was break a few rules and get caught. The victims never make it to the screen. The men and women who ploughed their life savings into Belfort’s “Make me rich” schemes. Belfort comes across as a charming sociopath unable to to empthise with people.

I found the film extremely disturbing, not because of the sex and drugs and profanities, but because it never shows the real human cost of Belfort’s actions.

If you want to discover the reason for the financial collapse in 2008, then this is your film. Greed, pure, unadulterated greed filtered through a drug-fuelled haze. Is there justice in the world? The answer from this film is “NO”. Have the financial players from the noughties learned their lesson? NO. Is the wealth of the USA based on a fiction? YES.

The film itself could quite easily be a stage play (and much shorter). A few years ago, we went to see the stage play “Enron”, which covered pretty much the same story – how greed and a total disdain for the regulatory process.