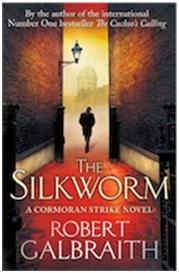 I have a small but select list of authors that are good for comfort reading. Robert Galbraith (aka J K Rowling) has become a member of this elite club. To qualify for this club, an author must write books which are good reads, good enough to be worthy of a second or even a third reading. Also, the book must have a good story, well told, and be pleasurable to read. This book ticks all the boxes. It was a good port of refuge as I struggle through The Narrow Road to the Deep North.

The Silkworm follows on The Cuckoo's Calling with its unlikely pair of detectives, Cormoran Strike and Robin. Lurking in the background is Matthew, Robin's cross, unimaginative and slightly jealous fiancé who Robin is shortly due to marry. Love interest between Cormoran and Robin? None, Cormoran is still in love with Caroline, the unstable beauty, Charlotte, who dumped him in The Cuckoo's Calling. And Robin does love Matthew, whatever his failings.

So what is the book about – a detective story, and like all good detective stories, there is a body and a race against time to clear the prime suspect's name. There is a theme, and this time Galbraith has set the story against the backdrop of the bizarre work of publishing.

A good novel should take you out of your comfort zone and open your eyes to a different world. I now know more about a certain type of literature that I would never consider reading, the gothic sex/horror novel. Galbraith has populated the novel with a memorable cast of characters; there is the transgender girl/boy, the grotesque literary agent, the predictable police detective, the very peculiar publisher. There two characters which really stand out for me are Leonora Quine, the wife of the victim, and the daughter, Orlando. Orlando is twenty-five, has significant learning difficulties and lives at home, sadly now just with her mum. Leonora is brilliantly drawn; a woman who can be dismissed by a few lines as thin, grey, mousy, few social graces. And yet. Leonora, seemingly totally unimaginative, focused on what she and her daughter now need for survival has to be respected. Even under the greatest pressure, she does not crumble. Arrested and imprisoned for a crime she did not commit, Orlando, her vulnerable daughter, is still her concern. There is no room for displays of grief in Leonora's world, for she is there to provide predictability and normality for her family. For years she had been the wife of Owen, a flamboyant and imaginative author. Whatever his latest mistress thought, Owen would not have left his wife and daughter. His home was where his typewriter was, and hi study and those domestic routines that allowed him to write.

Do we see something here about Rowling/Galbraith's view on relationships? That volatile, interesting relationships are not sustainable, what sustains a relationship and thereby marriage is love, concern, friendship, loyalty, affection – the qualities that are there in the relationship between Robin and Matthew but were never present between Cormoran and Charlotte?

This book is a great read.