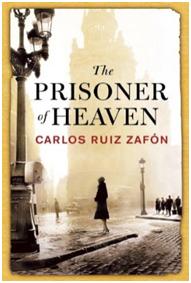 This is the third book of the trilogy started by Shadow of the Wind by the Spanish author Carlos Ruiz Zafón. I have just finished listening to it (purchased from Audible.co.uk). The Prisoner of Heaven is taken from a book by Julian Carax, the fictional author from the Shadow of the Wind. I had enjoyed the Shadow of the Wind, so much so that the Angel’s Game (book 2 of the trilogy) was something of an anticlimax. But this book brings both books together. The narrator is Daniel Sempere who is now married to Bea and has a small son. The star of the book is Fermin (Fermin Romero de Torres), an unlikely hero. Small, slight, not good looking, most definitely not a Hollywood star, on whose body is enscribed the brutality of the Franco regime and the barbarity of the Spanish Civil War. The story centres on Fermin’s time as a prisoner in the dreaded Montjuic Castle and his friendship with david Martine, the main character from the Angel’s Game. Despite the brutality of his experiences, Fermin is a man of compassion, a man of courage, the sort of man that anyone would be proud to have as a friend.

Fermin is about to be married to Bernarda, and all is not well with the groom to be. A mysterious stranger turns up in the Sempere bookshop and this stranger is the catalyst for Fermin to tell his story to Daniel. In this story Daniel finds out more about his friend and his mother as well as finding out what was troubling the groom to be.

Zafon writes a good book, the narrative is gripping, one begun it, the book has to be finished. Zafon draws us into two eras of Barcelona’s history – the Barcelona of 1960 and the post civil war Barcelona of the 1940s. How does a city recovery from a civil war, how does a city cope with a fascist dictatorship? How can the desire for revenge accommodate the desire to live a normal live?

There is a twist in the story, the world of David Martin. This is a world where the thin veil that separates the world of reality from the world of mental illness. How do we know what is real and what is fantasy? And yet here, right at the end of the book is a twist. Just when you think that there is only the real world, that the whole story can be explained, Zafon throws in the Angel from the Angel’s Game.