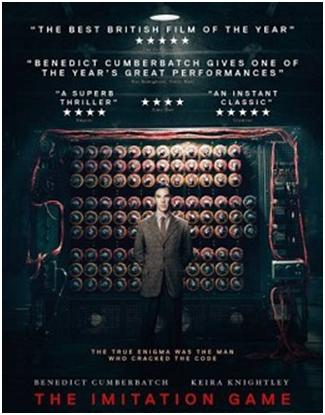 This is an extremely enjoyable film, even if the local cinema messed up the projection. There we were, just up to the point where Turing's Apspergers is obvious (a discussion on invitation to lunch) when the film stopped. And we had to endure 20 minutes of interruption while the manager/projectionist struggled to fix an incredibly minor fault in projection – something to do with an orange cast on the screen. But eventually the film was resumed and the enjoyment continued. OK – so the story had been simplified for screen consumption – but so what? This is a great story – a formidable mathematical genius who is able to circumvent norms of society in order to achieve the construction of the first digital computer to decrypt the enigma code.

Benedict Cumberbatch took the Sherlock Holmes character to a new level with his portrayal of Turing. That was to be expected from such a great actor. But Alex Lawther, the boy who played the young Turing at school in Sherbourne was a very convincing child version of the adult Turing.

Turing was a homosexual and we are bought face to face with the way that homosexuality was treated in this country until the 1960s. Turing's treatment by the hands of our establishment was shocking to the extreme. Throughout his life, Turing was subject to bullying, mainly because he was odd. He was bullied at school – do parents really spend vast sums of money so that their children can be bullied at public schools? If the treatment meted out to Turing by his peers had been handed out to my son, I would have been hammering at the gates of the school demanding justice for my son. Like so many people with Aspergers, Turing was lonely. In the film there are two friends, his first love, Christopher Morton, a school friend who died from TB and Joan Clarke (played by Keira Knightley) . Through the lens of both these, we find Turing a loyal and compassionate friend, but extremely vulnerable.

The film does raise important issues.

Alan Turing was a remarkable mathematician and this film just celebrates one aspect of his work. Its weakness is that it does not celebrate the other contributions that Turing made post war to computing. The fact that I am typing this on a laptop, writing to be uploaded to a server is due to Turing's work in the late 1940's and early 1950's. Alan Turing is a hero of the modern age and he should be remembered for more that his work on decrypting Enigma and a conviction for homosexuality.