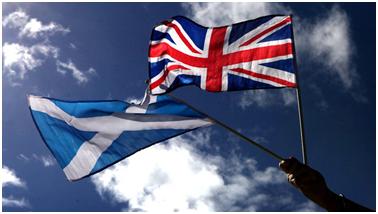 Maybe, before this referendum became a reality, I would have said YES, Scotland should be independent. From an English perspective, why do we need the Scots, with their whining and the massive chip on their shoulder about being hard done by? Hey the act of union joined two countries, Scotland was not the only country to lose its identity; England too lost something. We lost the English parliament, our nationality; we had to share everything, including our currency. What loyalty should we have to a country which gives free university education to Scottish students, and to other members of the European Union but not to those from England?

The Act of Union forged one country that was able to bestride the world like a colossus, one country that formed the British Empire and created the wealth of the nation that is now to be divided. Only together could this have happened. England, Wales and Scotland; augmented by Ireland in a later Act of Union. Now the heady days of Empire are a fading memory. But the wealth generated from the age of Empire still sustains the United Kingdom although the spread of wealth is somewhat uneven. Resources are unevenly distributed throughout the UK. Scotland has oil; the South East of England has the powerhouse of London. Our heavy industry, shipbuilding, steel making, coal mining all belong to a bygone age, along with textiles and other manufacturing. Their demise has left heavy scars all over the UK, not just in Scotland. The challenge to the government of the UK is to ensure that prosperity is evenly distributed.

Would England be better off without Scotland? Maybe England would be better off if she shed Wales and Northern Ireland as well as Scotland, and stood once again, after many hundreds of years on her own. A proud nation, a nation with a world class capital. Maybe. But England would be poorer, for the wealth of England comes not from being England, but from being part of a union. Would Wales and Northern Ireland benefit from the breaking up of the Union? If Mr Salmond can argue that small countries can have more vibrant and successful economies than larger countries, then surely this must hold for Wales and Northern Ireland. Small is beautiful, so smaller must be even more beautiful.

The fundamental question that should be asked is not about the independence of Scotland, but rather can the financial instruments of the United Kingdom be separated out into their component parts? If this cannot be done, then whatever the vote is on September 18th, Scotland could never be fully independent of the United Kingdom.

Should the United Kingdom be destroyed so Scotland can have its independence? If there is anything that Team GB in the 2012 Olympics has taught us, is it not that as the United Kingdom, we are a nation that can still bestride the world like a Colossus.