It is 5pm in Lymington. We are standing by the side of the road in the High Street waiting to see the Ben Ainslie bus. Beside us are two little boys. Both boys are here with their mums and younger siblings. One has his face painted as a Union Jack. Both boys are very excited.

We wait – the crowd is beginning to grow. The boys are attracting media interest from the reporters and camera men wandering up and down the high street. Some stop to interview the boys.

A cheer goes up – the post van is beside the Ben Ainslie postbox. A few minutes early I put my postcards in to the postbox – and never 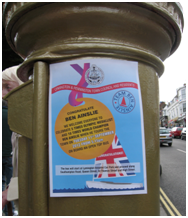 have I found a post box so full – I was concerned that my cards would fall out.

Still we wait. The news ripples through – the bus has left the hospital, then the bus is at The Avenue. A few minutes later, the bus is in St Thomas’s Street. The cavalcade is coming. Now much longer now. And then, coming out of the sunshine, cresting the brow of the hill is the bus. A cheer goes up as the open topped bus inches its way down the hill.

Everyone cheers, the flags are waved, the bus inches forward – the excitement is intense. As the bus moves towards the end of the High Street and its destination, we join the throng following the bus. Now the road is a sea of people following the bus – a few unfortunate drivers have been unwise enough to try to follow the bus downhill 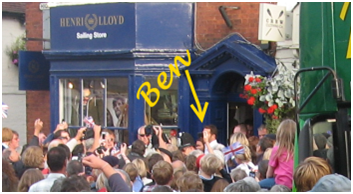 and are now marooned in the sea of people.

Somehow Ben gets off the bus which has stopped outside his house and opposite the famous postbox. Even more amazingly he has made it across the road to the Henri Lloyd Sailing Store. Someone cries “three cheers for Ben” and the crowd roars “hip hip hooray”. The hero has been welcomed home.