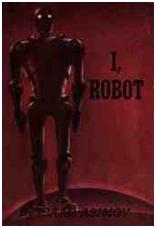 The story line is simple and reflects the origin of the book, nine inter-related stories first published in Science Fiction magazines between 1940 and 1950. The stories are based on interviews with Dr Susan Calvin, the chief robopsychologist at US Robots and Mechanical Men and chronicle the development of the robots and teh positronic brain.

Asimov invented the robot that we know and love and his legacy is felt throughout the science fiction world. Data in Star Trek: the Next Generation is powered by the positronic brain.

These are hardwired into the positronic brain and provide a framework for robotic behaviour.

There is a question that needs to be asked; do these three laws make robots inherently more moral than human beings. This question is explored in the eighth story, Evidence. Given these three laws, how can you differentiate a humanoid robot from a really good man?

Evidence is the prelude to the next question – if Robots are more moral to human beings, should they rule the world?

Suppose super robot brains are developed, brains that are built upon the Three Laws or Robotics – so that they would never harm human beings, and these brains were capable of processing immense quantities of information , enough to run the world. The promise is that war would be eliminated, hunger eradicated and every human desire for self fulfilment could be delivered. Why not, then, allow thaese entities run the world. Heaven on earth? I, Robot ends with this scenario. The earth is divided into 4 regions, and each region has a superbrain referred to as Machines. There is no more war, no more hunger, no more religious intolerance..

The big question : Would you vote in this system? Why (or why not)?